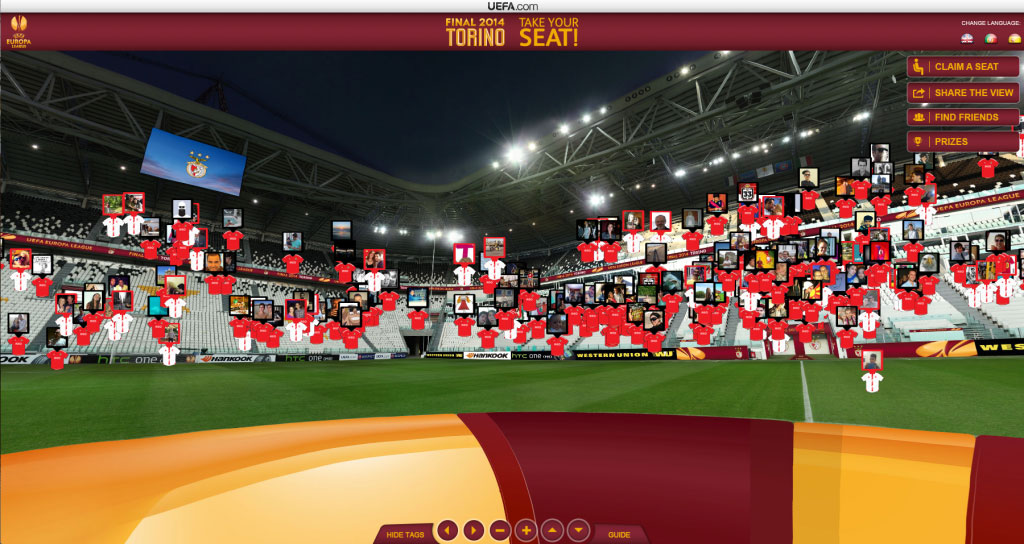 By Tinus Le RouxJuly 18, 2014October 6th, 2022Events
One Comment
At Fancam we thrive on delivering unique and innovative fan engagement campaigns. The “Take Your Seat” campaign for the UEFA Europa League Final 2014 ticked both those boxes. For the first time in Fancam history, we captured an empty stadium in high definition and used it as the foundation of a fan engagement campaign. The Juventus in Turin, Italy – the stadium where the final was to be played – got the full Fancam treatment with the notable exception of NO FANS present when we took the shot. The resulting interactive image was released by UEFA two weeks before the final and fans were invited to “take their seats” by digitally placing a picture of themselves in any of the available empty seats. By choosing a seat, fans were automatically entered into a competition and given the opportunity to share their chosen seat on Facebook or Twitter. As an extra incentive for those dedicated and die-hard fans, the stadium branding changed depending on which team’s fans had claimed the most seats. This boosted fan engagement and encouraged the fans of Sevilla and Benfica to claim their seats and make sure the Juventus Stadium was branded in their colors. The campaign is an excellent example of how brands can engage with their fans before an event has taken place, increasing social integration and providing a platform for positive engagement. The Empty Stadium Fancam boasts some impressive results: It was followed by a standard Fancam taken during the final, which built on the momentum created by the “Take Your Seat” campaign and generated even better numbers as a result. Explore the UEFA Final Empty Stadium Fancam here and the Fancam from the Europa League final here.