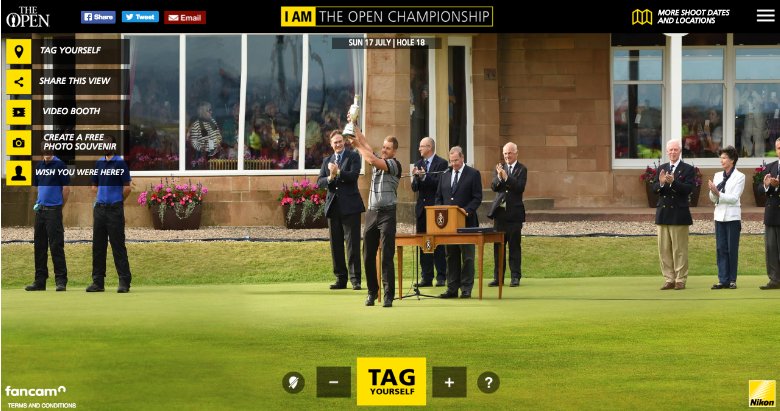 By Tinus Le RouxJuly 17, 2016October 6th, 2022Company news
No Comments
Fancam was there to capture the crowds and the occasion during golf’s oldest championship, the British Open, at the Royal and Ancient Golf Club at Troon, Scotland. The championship turned out to be a historic one with winner Henrik Stenson breaking two records as well as being the first Swede to win The Open. The rugged scenery of the west coast Scotland created a fitting backdrop for the Fancam photos taken. Our camera was positioned at the 8th (the Postage Stamp) and 18th holes to capture fans on every day of the weekend. The build-up to the Fancam started on the Thursday already, with the sponsor — Nikon UK & Ireland — employing roaming promoters with iPads moving around the course, demonstrating the Fancam experience to fans and encouraging them to sign up and share the event on social media. This piece of experiential marketing proved to be effective as fans started tagging themselves as soon as the first images went live on Saturday. The final round between Henrik Stenson and Phil Mickelson was described by golf pundits as some of the most dramatic golf seen in the history of The Open. A sweeping shot captured the fans watching the award ceremony with at the center Henrik Stenson lifting the Claret Jug.

Fans viewing the Fancam online were able to navigate between the holes where the camera was stationed. A mini-map made it very easy for viewers to move around the course and tag themselves in the stands or around the greens.

In conjunction with sponsor Nikon UK & Ireland, the Fancam managed to create a synergy between fans attending a major sporting event and the sharing the experience of “being there” on social media through the medium of hi-res photography. The Fancam comes into its own right when employed as a showcase for event sponsors, while at the same time encouraging a new generation to become followers of the sport.